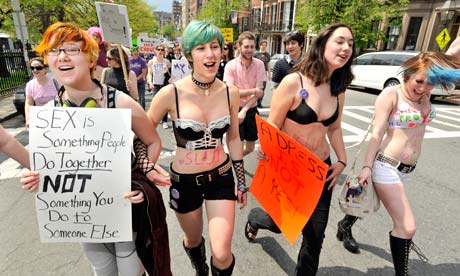 Note: I had long ago decided to stop blogging here for a couple of reasons. For one, I could not devote enough time to posting as regularly as I had in the past, but I also found more and more outlets with wider audiences that would publish my pieces. With so much dialogue surrounding SlutWalk lately, I wanted to insert the voice of a woman of color to add critical pressure from the margins; however, I found it difficult to find an outlet that would publish me. I first queried The Guardian, which had already printed a couple of pieces authored by white women about the event, and never heard anything back (they have, subsequently, posted more pieces about SlutWalk, all authored by white women). I then attempted to add this post on HuffPo, where I have contributed in the past – although they were nice enough to at least respond to me, they rejected my post. Rather than waste another week trying to find an outlet, I’ve taken the advice of people I love and trust and have revived my once-retired blog to post a piece that (oddly enough) explains some of the ways in which white women have constructed a conversation that women of color can’t seem to participate in.

According to its website, SlutWalk was created by women who “are tired of being oppressed by slut-shaming; of being judged by [their] sexuality and feeling unsafe as a result.” SlutWalk aims to “reclaim” the word “slut,” by taking to the streets and demanding people begin to think about the way women are damaged by stereotyping. What’s now grown into a Global North movement, SlutWalk has predictably captivated the media. One can read numerous blogs and articles, and examine diametrically opposed op-eds posted on both sides of the Atlantic – all authored by white women. With such a sensationalized event name, it makes sense that the event would gain attraction. What doesn’t make sense is the racist way in which SlutWalk has chosen to present itself – the result of the group’s white leadership, which has systematically silenced the voices of women of color. Women are left with little assurance that the word “slut” can even be reclaimed at all, and it would be absurd to imagine that SlutWalk’s dramatized events will do anything to stop any kind of violence against women.

SlutWalk was conceived after a cop reportedly told a group of Toronto students that women “should avoid dressing like sluts in order not to be victimized” during a campus event to address sexual assault, which he was invited to. I understand the need to denounce this type of speech, particularly when uttered by a law enforcement officer. But what struck me was the fact that a group of students gathered with law enforcement to begin with. As people of color, our communities are plagued with police brutality, and inviting them into our spaces in order to somehow feel safer rarely crosses our minds. I’ve attended several workshops and panels on sexual violence and would never imagine seeing law enforcement in attendance. Groups like INCITE! have done a tremendous amount of work to address the way that systemic violence is directed against women in communities of color through “police violence, war and colonialism,” as well as to address the type of interpersonal violence between individuals within a community, such as sexual assault and domestic violence. SlutWalk “want[s] Toronto Police Services to take serious steps to regain [their] trust;” our communities, meanwhile, never trusted the police to begin with. For a group of privileged students to stage such a massive event and dismiss the work that our communities have done to make sense out of the disproportionate accumulation of violence that we face is wholly unacceptable.

As Trymaine Lee has reported, black, poor and transgender women are being disproportionately and systematically branded as criminal “sex offenders” on an online database for engaging in “survival sex” in New Orleans. Under the cover of an obscure, slave-era legal term called “crimes against nature,” police officers target those who engage in oral or anal sex-for-money. Those targeted for a second time are charged as felons (vaginal sex-for-money, meanwhile, is considered misdemeanor prostitution). 40 percent of those who appear on the sexual predator database are there because they were accused of committing a “crime against nature;” more than 80 percent of those are black women.

If SlutWalk truly wanted to bring attention to the systematic ways in which women are harmed by regressive and misogynistic thinking, they could have done the heavy lifting of reaching out and supporting black, poor and transgender women in New Orleans, for whom the word “slut” carries a criminal sex offender record. Instead, they force us to keep bearing the multiple burdens that come with not only being a woman, but also being a working class woman of color. Had SlutWalk organizers considered New Orleans – or perhaps any city in the Northern Hemisphere where undocumented women possess a very real fear that a call to the police for any reason will result in her own deportation – they might have thought twice about sinking so much time and energy into their event. They might have had to listen to women of color, and actually involve them in visioning for what an equitable future would look like. Instead, they decided to celebrate a term not everyone is comfortable even saying. While I will not pretend to speak for women targeted in New Orleans, I doubt that the mere idea of naming themselves “sluts” would be welcomed. SlutWalk has proven itself to be a maddening distraction from the systematic and interpersonal violence that women of color face daily.

On my Facebook feed yesterday, a prominent Boston-based white feminist complained that, although the BBC had interviewed her for one of its internationally highest rated programs, she “was on for like two seconds in the second hour which doesn’t air in the US. Verrrrrrry [sic] frustrating.” This woman had already participated in a 40-minute episode on a Canadian television program with four other white women, where they debated each other about SlutWalk. She was also a featured speaker at SlutWalk Boston, and her speech was posted online with full transcripts (as far as I know, not one person of color spoke at the event in question). The tremendous amount of entitlement implicit in her post felt suffocating. When I responded that two seconds of airtime was considerably longer than women of color had on the topic, she wrote that she agreed “with the larger critique,” but felt compelled to correct me by adding that “there were a number of women of color on this program.”

Her entitlement was coupled with the kind of lip service intended to keep women of color quiet, as well as a dose of correction to prove her superior ability to still be right – all typical of liberal white women who have never truly listened to begin with. Regardless of the fact that a scarce amount of women of color got international airtime on the BBC for the first time since SlutWalk was conceived several months ago, its organizers never reached out to women of color as equals to begin with; instead of making sure our voices participated in its visioning, we have been painted into a colored corner inside their white room. SlutWalk’s next turn, I’m quite sure, will be our tokenization. I imagine that women of color will be coddled by white SlutWalk organizers, eager to save (white)face, into carrying their frontline banners and parroting their messages at a stage near you. I’m hoping my sisters won’t fall for it; I know that I, for one, will stay home. This is not liberation – if anything, Slutwalk is an effective exercise in white supremacy.

There is no indication that SlutWalk will even strip the word “slut” from its hateful meaning. The n-word, for example, is still used to dehumanize black folks, regardless of how many black folks use it among themselves. Just moments before BART officer James Mehserle shot Oscar Grant to death in Oakland in 2009, video footage captured officers calling Grant a “bitch ass nigger.” It didn’t matter how many people claimed the n-word as theirs – it still marked the last hateful words Grant heard before a white officer violently killed him. Words are powerful – the connection between speech and thought is a strong one, and cannot be marched away to automatically give words new meaning.  If I can’t trust SlutWalk’s white leadership to even reach out to women of color, how am I to trust that “reclaiming” the word will somehow benefit women? The answer is, I can’t. In fact, “reclaiming” is defined as taking something back that was yours to begin with, and the word “slut” was never ours to begin with, so it would be impossible to reclaim it.

According to SlutWalk’s website, the event is slated to be reproduced in Argentina sometime this year. It’s the country I was born and raised in, among Spanish, Guaraní and Portuguese speakers – and I can assure you that the word “slut” is not used by anyone there. This is not what we need. I do not want white English-speaking Global North women telling Spanish-speaking Global South women to “reclaim” a word that is foreign to our own vocabulary. To do so would be hegemonic, and would illustrate the ways in which Global North “feminists” have become a tool of cultural imperialism. I will be going back home in about a month, and want to do so without feeling the power of white women bearing down on me from 6,000 miles away. We’ve got our own issues to deal with in South America; we do not need to become poster children to try to make you feel better about yours.

Whether white supremacist hegemony was SlutWalk’s intent or not is beyond my concern – because it has certainly been so in effect. This event will not stop the criminalization of black women in New Orleans, nor will it stop one woman from being potentially deported after she calls the police subsequent to being raped. SlutWalk completely ignores the way institutional violence is leveled against women of color. The event highlights its origins from a privileged position of relative power, replete with an entitlement of assumed safety that women of color would never even dream of. We do not come from communities in which it feels at all harmless to call ourselves “sluts.” Aside from that, our skin color, not our style of dress, often signifies slut-hood to the white gaze.

If SlutWalk has proven anything, it is that liberal white women are perfectly comfortable parading their privilege, absorbing every speck of airtime celebrating their audacity, and ignoring women of color. Despite decades of work from women of color on the margins to assert an equitable space, SlutWalk has grown into an international movement that has effectively silenced the voices of women of color and re-centered the conversation to consist of a topic by, of, and for white women only. More than 30 years ago, Gloria Anzaldúa wrote, “I write to record what others erase when I speak.” Unfortunately, SlutWalk’s leadership obliterated Anzaldúa’s voice, and the marvelous work she produced theorizing what it means to be a queer woman of color. They might do us all a favor now and stop erasing the rest of us for once.

553 thoughts on “SlutWalk: A Stroll Through White Supremacy”